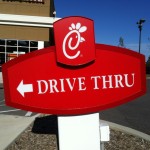 For those of you who know me, know that last week was the week from hell for me. For those who don’t know me, you’ll have to stay tuned, because I’m not ready to blog about those events yet. The wounds are still too fresh.

I was pissed. I was more than pissed. I was enraged. How dare TTB think that her time was more important than mine? It took every ounce of what was left of my sanity to not let my foot accidentally-on-purpose slip off the brake pedal.

For the next five minutes, I stewed and intermittently flipped her The Bird if I thought she was looking in her rear-view. And then, to quote Dr. Seuss’ How the Grinch Stole Christmas, “Then he got an idea! An awful idea! THE GRINCH GOT A WONDERFUL, AWFUL IDEA!”

Now it was TTB’s turn to shout her order into the talking box. When she opened her mouth (covered in way too much red lipstick) I leaned on my horn! The look on her face was priceless. The kids thought it was funny. So did I. So funny, in fact, that I did it about three more times she attempted to speak! I laughed my ass off.

So thank you, again, TTB for giving me the comic relief I so desperately needed after the week from hell!

This is how my three year old, Ernie, starts our “family time” each evening! My kids’ favorite way to spend their pre-bed television time is watching “America’s Funniest Home Videos.”

I guess watching countless men get hit in the family jewels with baseball bats, golf clubs, soccer balls and small children’s fists is the perfect end to the day. Heck, I saw one episode where they gave $100,000 to two little boys who were apparently wearing their first cups that day and were bouncing baseballs off of their crotches.

AFV has been on the air for 17 years and has gone through a lot of hosts. How do I know this? Because we watch this show six days a week and most of them are re-runs. I have watched Bob Saget’s nose get bigger with each episode (or maybe his head shrunk). And I have marveled at the unending number of phony-ponys, hair rats, and extensions Daisy Fuentes’ hairdresser uses to make her look even taller and her ass look smaller.

Taking one in the bits ‘n pieces isn’t the only way to get on AFV. Piñata mishaps seem to be quite popular. As soon as a piñata appears on screen Ernie starts yelling, “he’s going to get hit in the head”, and he’s rarely disappointed.

It may not be the most Leave-It-To-Beaveresque family time.  The way I look at it is this:  We pop some popcorn and laugh together, so I guess I can over look the minor detail of the source of the hilarity – other people’s pain!