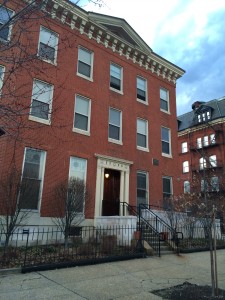 A blog born by c-section

Today I drag my blog, ready or not, into the world. It’s been gestating for about a year, well past its due date, and has refused to arrive by natural means, not unlike my kids (I let fear get in the way). I hired a graphic artist (drove crazy), Michelle Baron, to create my blog header, but still didn’t get on with publishing it. I drove over 1,000 miles round trip, with Aliza Worthington riding shot-gun, to the Erma Bombeck Writers’ Workshop in beautiful downtown Dayton, Ohio, but still didn’t get on with publishing it.

So, what finally forced me to reach into the warm, dark, safe place that my blog had been hiding in (my hard drive), and bring it out kicking and screaming into the bright light?  The co-editor of the Not Your Mother’s Book. . . series (think Chicken Soup for the Soul, except funnier), Dahlynn McKowen. I had the pleasure of meeting Dahlynn at the Erma Workshop. Over lunch she told me about her book series, and suggested that I submit a story to one of her anthologies. So I did. 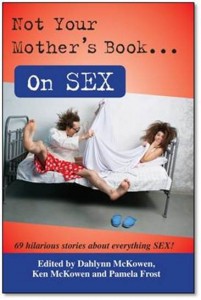 My essay, “Ménage à Twerp”, is published in Not Your Mother’s Book…On SEX. There are 69 stories (coincidence? I think not) in the anthology showing the funnier side of sex, but not a blow-by-blow (snicker), detailed description.

Dahlynn informed me last week that I was going to be featured on her blog, Laugh Until you Pee, today (squeal). It occurred to me, about two days ago, that she was giving me the gift of exposure to the blogosphere, and that I had better get my ass in gear and not screw it up.

I lay before you, all pink and pruny, with the metaphoric umbilical cord still attached, my blog. Like me, it is a work in progress. Please poke around and read some of the old stuff that I have written. Don’t forget to come back often to see the new stuff. I hope that I make you laugh a little each time. If you get the chance ‘like’ Taffy’s Facebook page, too. 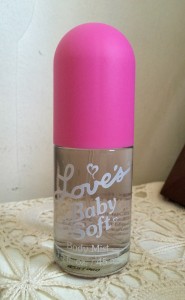 Last week, a high school friend posted a picture of Love’s Baby Soft cologne on Facebook with the comment, “who remembers wearing this stuff in high school?” Soon after, many forty-something females starting ‘liking’ the photo, including myself. My, did that bright pink bottle, with the cap as tall as the bottle itself, take me back to my teenage years. I recalled the year my hand-knitted red Christmas stocking, with the angora bearded Santa Claus, was filled to the brim with Love’s Baby Soft products. I was prepared to be a cloud of baby powder scented sweetness. In my stocking was not only cologne, but talcum powder, bubble bath, and deodorant, to layer upon my 15-year-old self. The advertising campaign slogan was “anything can happen when you are in love.” What teenage girl didn’t fantasize about their first love? All of my friends were wearing it, to the point that even the boys knew the scent by name. As I was reminiscing about Love’s, a comment was added to the Facebook post, “They still make Love’s.” (I later discovered that it has its own fan page on Facebook). I immediately logged onto Amazon.com to find that, indeed, it was still being made. I didn’t hesitate to click the ‘Buy now’ button. The description of “kid’s perfume” didn’t deter me. I need to share with Love’s that they are marketing to the wrong demographic. We over forty women still love the gentle, clean fragrance of baby-powder with a slight floral hint. I don’t remember when I stopped wearing it. I’m sure I reached a point where I felt that I was too mature to smell like a baby. I moved on to headier scents, such as Ralph Lauren and Poison. My bottle arrived Monday. I’ve spent the days since sniffing my wrist remembering teenage loves found and lost. My husband smelled my neck and said, “you smell nice. Is that new?” I guess those now forty-something teenage boys are still having their heads turned by it too.