I hate to brag, but I’m an Uber Mom. You know, the mom who leaves snacks on each child’s seat in the car at pick up time. The mom who has never let a GMO pass her precious offspring’s lips. Who did her research and bought her children the same bicycle helmet that Lance Armstrong wears (no amount of performance enhancing drugs will protect the old noggin so you know he wears a good one). Like I said, I am an Uber Mom . . . . NOT!!

No, this Mom tells her tribe at pick up, when they declare that they are hungry, “Good! Maybe you’ll eat what I make for dinner tonight.” And Pop-Tarts are a food group, right?  And honestly, no sooner do you spend five minutes getting the bicycle helmet strapped to their head than they ride four feet, yank it off, throw it in the grass, and declare that it’s too hot to play outside. So why bother?

Rather, I became an Uber driver this week. I spend most of my day schlepping people around for free, so why not get paid to do so sometimes? Yes, when my niece Michele suggested it, I was a little apprehensive. I’ve watched way too much CSI and Criminal Minds to not know what evil lurks out there.   So I did my homework and found out that there hasn’t been a rash of Uber murders (yet) and decided to sign up. I could have started driving sooner, but Robbie yanked on the door handle too hard and broke it. I know my passengers have mostly likely watched Criminal Minds too, so I didn’t want them to think they were being kidnapped when they couldn’t get out. That’s just bad for business.

I decided that on my first night out I would cruise a college town near me on St. Paddy’s Day. What better night to make money than one with a bunch of drunken college students, right? Wrong! In true Taffy-fashion I picked a night during spring break . . . <cue cricket sound>

I did pick up three fares. Ubering (is that a word? Well it is now because I just made it one) has a huge upside: getting to meet people in a macro setting. You have people in your car for 10-20 minutes and dead air to fill. My garrulous side is in heaven. Here are my first three fares:

Ride #1: My first ever Uber passenger was a teenager named Ron. He needed a ride home from his job as a server at an assisted living home. His mom couldn’t pick him up so he had to call an Uber. I told him to tell his mom that a mom brought him home. He told me to be careful and get some pepper spray.

Ride #2: Uber gave me a Dulaney Valley Road address, but the rider icon on the map showed that Connor was standing on York Road, which is around the corner. I was confused. So I may have gone around the traffic circle at that intersection a few times (read five). When I finally found Connor and his fellow 20-something friends in front of the Green Turtle Bar they were laughing as they got in. I assumed the laughter was directly correlated to the waft of alcohol that came into the car with them (sidebar: Stud Muffin wanted to know who would clean up the puke when a drunk hurled. I checked, Honey, Uber reimburses for cleaning and damages. We’re covered.) I was wrong. The laughter was from them watching me on the Uber map going around and around in the damned traffic circle. Eff technology.

Connor’s very drunk friend Megan wanted to know why I was Ubering. I said I wanted to go to Italy next year and maybe I’d write blog post about Ubering my way to Europe or something. She whips out her phone and asked for the URL. I had to tell her a few times. Did I mention she was a little drunk? Well, for the rest of the ride she read “Dead Cat in a Pickle Bucket” aloud to me. I must say, you’ve never really heard your blog posts until a drunken girl reads them to you (Stud Muffin says that makes this a meta blog but I’m not sure what that is. And I frankly don’t have time to look it up. If you know what that is, please explain his geekiness to be in the comments below.)

Ride #3: Her name was Jessica. She was going home after celebrating her friend Allison’s St. Patrick’s Day birthday. She was ashamed that she was calling it a night at 10:00 pm, “It sucks getting old. You can’t drink like you use to.” She was all of 25. I didn’t want to depress her more about the other things that suck about getting old.  I figured that I’d let things like droopy boobs and peeing a little when she sneezes be a surprise later in life.

In taking her home I may have also gone the wrong way down Perring Parkway; in my defense it is an overly wide road and it was dark. When I realized what I did, Jessica was very forgiving, “that’s okay. I’ve done that before, too.”

I went out yesterday and Ubered (see, I’m making new words up as I go) too. The most memorable ride was Mike and his friends. Again, a group of 20-somethings, who didn’t want to walk a half-a-mile to a bar in the rain.

I’ve come to the conclusion that helicopter parents created Uber. We have raised a generation which has become so accustomed to being chauffeured everywhere, that getting a ride to a bar six blocks away seems normal.  Being able to open an app and get a mom like me to pick them up must make them feel right at home. Next time, I’ll leave gluten-free cookies and organic juice boxes on their seats.

Pickled Kitty in a Bucket 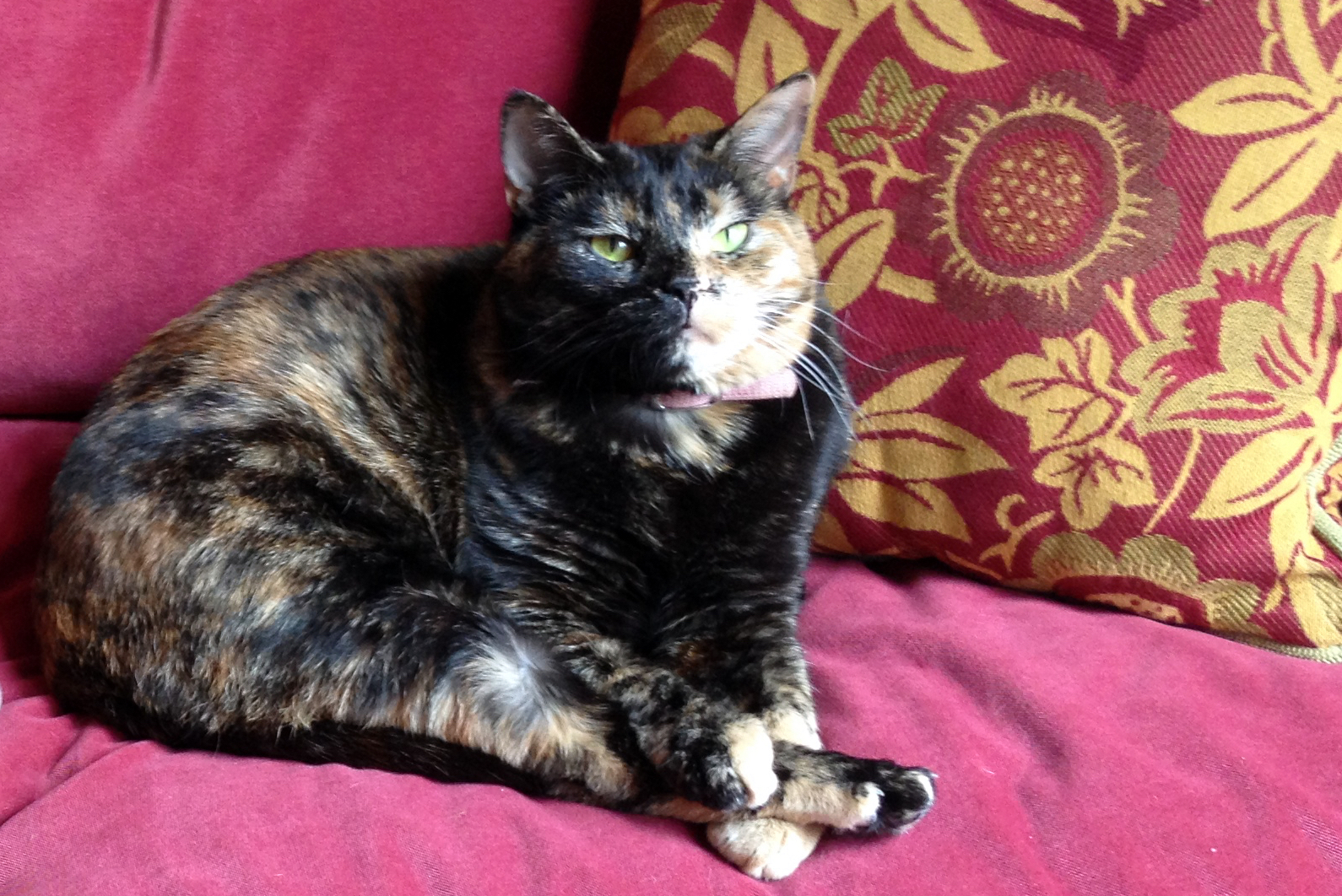 Having a frozen dead cat thawing in my garage was not a situation I would have ever thought that I would be faced with but, yet, there I was.

Earlier that morning, our five-year-old rescued calico cat, Daisy, was having difficulty breathing. An emergency trip to the vet brought the news that she was suffering from congestive heart failure, and there was nothing that could be done for her. I did the humane thing and had her pain ended there and then. I cried into her fur and left, having made arrangements to have her cremated. Or so I thought.

My Three Sons, after learning that she had passed, unanimously put the kibosh on her cremation. “You can’t burn her up!” they declared incredulously. I called the vet and told them the plan had changed, and that I would be back to retrieve her body.

In the past we had buried other cats in old toolboxes in the backyard. It was January and I thought the ground would be too hard to dig, thus the decision to cremate this time. Since I was fresh out of toolboxes, I stopped at Home Depot on the way back to the vet’s for a proper coffin. I gave the toolbox to the vet tech and asked her to please put Daisy in it for me. She returned a few minutes later with an empty toolbox and something wrapped in an old Mickey Mouse blanket.

“I’m sorry. She froze in such a way that I can’t fit her in the toolbox,” apologized the vet tech. It had never occurred to me that they froze the dead pets awaiting cremation. Honestly, this was information I could have gone my whole life without knowing

Upon returning home, I put her in the garage, hoping that she would be thawed enough by the next day to fit into the toolbox.

No such luck. She still had her legs straight out in front of her. We started looking around the garage for an alternative container.

“Hey! Do you think she’ll fit in this pickle bucket?” said Chip. I had purchased an empty, bright red Firehouse Subs five-gallon pickle bucket a few years ago (the proceeds go to their Foundation to help improve lifesaving capabilities). And, as luck would have it, she

This whole experience does leave me a bit concerned. When it’s my turn to be buried, will my boys go to Firehouse Subs looking for a cast-off pickle barrel at a deep discount? At least they’ll be supporting a good cause if they do.