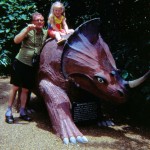 en 40 Labor Days today since my father chose to leave this world, at the age of 49. I’m just a few months away from my 49th birthday. It happens to also be 40 years to the day. Most people remember the death of someone on the date they breathed their last, but I have long since counted Labor Days. I guess it was easier for me to remember as a child of eight. At that age, most dates didn’t hold much significance except for one’s own birthday.

I’ve long since made peace with his choice, but it wasn’t always that way. It took me until I was a young adult to understand 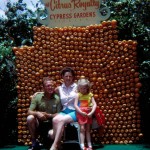 that his choosing to leave that day had nothing to do with me. It wasn’t about his dislike of me cutting my waist-length hair short just a week before. Or that my puppy had damaged furniture earlier that day. It was about his own internal struggles, which no one will ever know or understand.

Everyone has a different opinion about suicide. Some think it is an act of cowardice. Others view it as brave desperation. I think the death of Robin Williams last year taught us all a lesson. No one truly knows what’s in the heart or head of another person. We cannot judge anyone’s true happiness level on what they present to the public. Much like Robin, to the world, my father was a happy, always joking, out-going man who called everyone, regardless of gender or age, ‘babe’.

was Mike Wight? He was born in Baltimore City, the youngest of three kids. He never knew his mother, as she died in childbirth when he was two. His father didn’t provide much guidance, so he raised himself. Daddy didn’t go past fifth grade in school. He got in trouble one day; the school said that he couldn’t come back until his father came in for a conference. My grandfather said, “My school days are over, I’m not going back,” so neither did my father.

He was a whiz with numbers and may have gone far with his aptitude. We’ll never know. He worked odd jobs to feed himself. A local business owner paid him to sweep her floors and would make sure he had a hot meal. When he was old enough to drive, she had him making deliveries in the company truck. He drove for the rest of his life. Ice cream trucks, delivery trucks, oil trucks, and 18-wheelers. 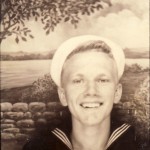 United States entered WWII, he lied about his age before he could be drafted. He wanted to guarantee that he went into the Navy, with his rationale being that he’d at least have a bed at night. The day after D-Day, the ship he was on, the USS Susan B. Anthony, struck a mine and sunk a mile off of the coast of Normandy. He was never the same person after that, my mother says. 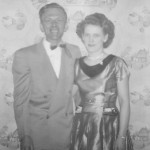 rents knew each other as children and were sweethearts when he left to fight in the war. They were married not long after he returned, and my sister and brother came in rapid succession. I was the ‘late life’ baby, arriving 20 years after my brother. Daddy gave me my blonde hair, blue eyes, and quick wit.

Today, I do not mourn him as much as I am sad for all that he missed. He missed meeting four of his six grandchildren, walking his youngest daughter down the aisle, enjoying an empty nest with my mother, and the freedom of retirement. But maybe I’m measuring my view of being 49 years old against his. I don’t feel that 49 years is nearly enough to do all that I want to do, and I look forward to many more years. Maybe it was the exact number of years for him to feel that his life was complete. It was his life to do what he wanted. Not mine.

At least my mother is free of remembering him today. Dementia has an occasional upside, I guess. I won’t remind her.  That would be cruel. I’ll keep him in my heart and head today enough for the both of us.

View more posts from this author
« Pickled Kitty in a Bucket
Today’s Taffy Pull: Hands off My Cupcake Shower Gel »